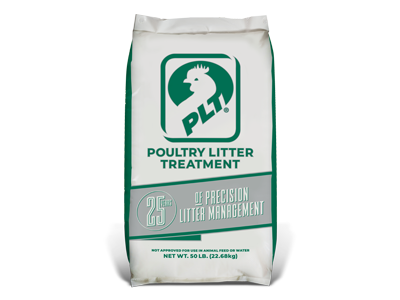 PLT® litter amendment, the product created to mitigate the ammonia challenge and safely lower pH emerging from the industry’s move to built-up litter, celebrates its 25th anniversary this fall.

“Maintaining our position as a critical management tool is the result of a consistent product, motivated technical and sales staff, and the ability to adapt to changing markets,” said Bernie Murphy, President, Jones-Hamilton Co. “We thank our customers for allowing us to be part of their process improvement initiatives to efficiently produce safe, affordable and high-quality poultry for the global consumer.”

The 25th anniversary of PLT® not only marks a milestone of the company, but also the start of a shift in the industry’s production model. At the end of the last century, expansion and modernization spurred considerable changes in poultry housing design and bird genetics. The move to built-up litter due to expense and scarcity of bedding material caused increased ammonia levels—blinding birds and triggering uniformity issues, secondary infections, viral challenges and more.

Harris later found promise in sodium bisulfate, a toilet bowl cleaner ingredient, noting its ability to control ammonia for seven to ten days during the brood cycle without corrosion or volatility challenges. Harris approached the manufacturer, Jones-Hamilton Co., and PLT® Poultry Litter Treatment was introduced to the poultry industry on September 12, 1994. It has since become the industry’s flagship solution for sustainably controlling ammonia and reducing energy costs, and has been proven to improve nitrogen conservation and support industry sustainability initiatives by reducing greenhouse gas emissions.

“PLT®- litter amendment remains the safest option and has become an integral part of the health and welfare management protocols in both traditional and antibiotic-free broiler production,” said Murphy.

“Over my 25-year career with Jones-Hamilton Co., it has been my pleasure to promote PLT to thousands of poultry producers and to educate the industry on the importance of litter management,” said Blake Gibson, Global Sales Manager, Jones-Hamilton Co. Agricultural Division. “I hope I have carried Dr. Ray Harris’ dream of finding a safe, effective and environmentally-friendly product.”